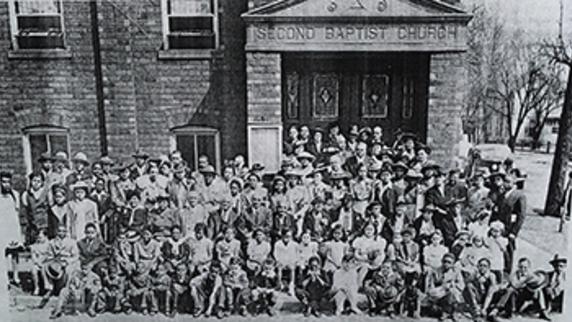 Five years after the great war between the states had ended during the early years of the reconstruction, there was evidence in all sections of our country of sincere efforts to bind up the wounds of our nation. Nowhere was this evidence more convincing than in the missionary zeal of the Baptist church.

Indiana was one of the states fostering such work and men like the late Richard Bassett and Lewis Artis were at the vanguard of the movement. Under the guiding spirit of the state missionary Rev. Lewis Artis, the first black Baptist church of Terre Haute was organized. In the year 1871 at 28 Second Street, the Third Baptist Church was organized. The first leader of this small group was Rev. Hardin Anderson. The first deacons were M. P. Bragg, Willis Wade, Alfred Thomas, John Waller, W. M. Jackson, Silas Jones, and A. C. Corthen.

After a short period, the church moved from the Second Street site to 15th Street near Wabash Ave. Pressed by the need for a better location, a lot was purchased at 7th and Deming Streets and a building was erected. This building also proved inadequate. Therefore, the present site was secured by Rev. Stephen Clay, the successor to Rev. Hardin Anderson. Rev. Clay purchased the lot and building, which had been used as a meat market, for the sum of $1,600. It was at this site and during this period that the organization adopted the name of the Second Missionary Baptist Church, a name that had been reserved originally by the First Baptist Church for their missionary expansion.

The existing structure was renovated and served as a house of worship until the congregation was able to construct a more suitable building, which was completed under the pastorate of Rev. Clay. Rev. Clay who resigned to accept another pastorate, was succeeded by Rev. Bluford Hillman. Under Rev. Hillman’s pastorate, the church grew numerically and spiritually. The church plant was remodeled. Rev. Hillman served as pastor or 15 years before resigning to accept the pastorate of the Mt. Zion Baptist Church at Lincoln, Nebraska. Rev. Hillman was succeeded by Rev. Henry Snowden who served the church for three years. Rev. C. M. C. Hammond followed Rev. Snowden and renovated the parsonage before leaving to organize the Calvary Baptist Church at 13 ½ and College Streets. Rev. Wm. Dickerson succeeded Rev. Hammond and had served but a few months before the church building was completely destroyed by fire.

It was during this crisis that the devotions loyalty and sacrifice of the membership manifested itself making possible the completion of a rebuilding program that took eight months. On the third Sunday of November 1916, a grateful congregation received the keys to the present church building from the contractor and chief engineer, Mr. David Jenkins. Mr. Jenkins was a member of the church and a local contractor of note. Under his skillful direction and with much volunteer labor form the members, the cost of rebuilding was held to a minimal cost of about $8,000. It was during this period that seven men of the church co-signed a mortgage, making possible the funds needed for the worthy project.

As a result of this vision, the church has grown spiritually and financially under the following pastors: